Acedia (アケディア Akedia) is a Black Knights and an antagonist of Sin, Damnation and the Atonement Girl.

Acedia contains two people within himself, who are siblings. Aside from Superbia, Acedia seems to be the only one who is completely loyal to Avaritia without questions. He is a little arrogant, however, as he is the very first version of Index's ultimate weapon. Not much information is given about his personality, but it's showed he is very calculative in the battle and, amongst all the Black Knights, he is one of the most cruel towards the Fragments, and isn't really zealous in his mission, unlike Ira. On the other hand, he isn't showed having particular affection or comradeship toward his comrades, as some of them have, but shows care toward his sister. In the anime, he developed an obsession toward Kakeru, as he wanted to see the power of his eye. His sister never talks in the story directly and her own personality isn't really showed, but in the anime, as her brother died first and she ran away, she is showed being the less dangerous amongst the Black Knights, as she has been easily killed by Shiori.

Acedia is not one but a two humans combining their magical power together. They are Benedictus of the Bookshelf (書架のベネディクトゥス Shokan no Benedikkutusu) and Scholastica of the Bookshelf (書架のスコラスティカ Shokan no Sukorasutika). The two used to live in Mt. Elbrus of the Caucasus range. Benedictus' real body was only his head, from the neck and under were replace with an artificial body called Batraz to amplify high speed chanting and the power of his attack spells. Scholastica's body was completely discarded and her psyche was transferred to the orb shape artificial body in front of Benedictus' chest called Dzerassæ, which also stored all of his relic and spell books. Due to not having a humanoid body, Scholastica's "body" is actually a hologram projection and couldn't talk. Due to her link with Benedictus, she can communicate telepathically with him. However, for other people, she couldn't do more than bodily gestures to communicate with them. As the artificial body research of Index progress, both of them often use a giant artificial body call Uastyrdji for combat situation.

Later in 1945, they came with Georgius of the Rainbow as his subordinates to Ayamegaoka to defeat the witch Lieselotte Despite his magical abilities, the gap of power between him and Lieselotte was obviously to great and he was killed. After Georgius managed to defeat Lieselotte by splitting her power into different dimensions, Misao Kusakabe used her shikigami to bound the Larvas into Benedictus and others' bodies, forming the Black Knights. He would then spend his life to defend the crystal which was holding Lieselotte (now as Lisette) imprisoned.

In 2009, the Fragments of Lieselotte were gathered in the Red Night and the Black Knights decided to destroy them. After Gula was killed and Ira was incapacitated, he and Invidia were dispatched to attack the Fragments from two directions, making a surprise attack. Unfortunately, he was the only one that arrived at the designated point, as Invidia was stopped by Shiori. Even without support, his abilities as the ultimate weapon of Index gave him some advantages. However, he was up against all the Fragments (with the exception of Shiori who was secretly defending the bridge) simultaneously. Therefore, he was defeated by their combined efforts.

During the battle, while the others distracted him, Misuzu used her most powerful weapon, the cursed sword Doujigiri Yasutsuna to slice his head in half. He did not die, however; the one that Misuzu killed was his sister Scholastica instead. In rage and sadness, Acedia swore revenge the next time they meet and teleported away. Unfortunately for him, Shiori was still at the bridge and he encountered him on his way back to the crystal. He tried to attack but to no avail, as his magical capabilities were halved by losing his sister. Shiori then revealed that she was "Ursula of the Bookshelf", the completed version of Index's ultimate weapon, and she held 5000 magical books within her body as her energy source, which was obviously more than the number of scrolls he was carrying. Acedia realized that she was also from his family line and was shocked. Shiori then killed him without holding back.

Acedia appeared with the others in the Crystal Palace during the second episode, but before they could attack the Fragments, the Red Night ended.

He made his first main appearance during the episode 6, after Ira's defeat. When the Red Night appeared again, Avaritia sent him battling the Fragments. When Superbia told him to not let his guard down, he responded that he wasn't like Ira. Later, he confronted the Frgaments while they were searching for Yuka (excepted Takahisa). Misuzu asked him why they attacked them, as themselves didn't have reason for killing them in this world, but Acedia said that they had a reason and their only existence was a sin itself. Misuzu mocked him, but Acedia answered that they must been killed for the future. Afterward, he attacked Misuzu, before threatening Kakeru whom he wanted to see his power, but Kakeru couldn't use it. Disappointed, Acedia was about to kill him but Kukuri intervened and stabbed him from behind, before cutting his head off. However, one part of his head managed to escape away which was Scholastica.

In the episode 7, his sister survived to go for another mission but met an unknown enemy (who was actually Shiori) who killed her.

In the episode 9, Superbia used fake versions of Black Knights due to her shikigamis, including Acedia. However, Kakeru defeated them.

Acedia acts as the "mage" of the Black Knights. His proficiency in magic enables him to excel at both defense and offense. He cannot defend himself from attacks from more than two directions, however.

As the prototype ultimate weapon of Index, he carries a total number of 8 scrolls in his body. Normally he uses two of them to support him. In a situation where he has to go all out, all of the scroll will be used, allowing him to perform more devastating spells.

Scholastica of the Bookshelf: Scholastica is the less dominating part of Acedia; the sister of Benedictus. As Acedia, she is mute and cannot speak to anyone but her own brother through telepathy. Benedictus often talks for her. 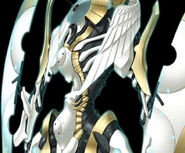 Add a photo to this gallery

Retrieved from "https://11eyes.fandom.com/wiki/Acedia?oldid=14707"
Community content is available under CC-BY-SA unless otherwise noted.